Terceira is an island in the Azores archipelago, in the middle of the North Atlantic Ocean. It is one of the larger islands of the archipelago, with a population of 56,000 inhabitants in an area of approximately 396.75 square kilometres (153.19 square miles). It is the location of the Azores' oldest city, Angra do Heroísmo, the historical capital of the archipelago and UNESCO World Heritage Site; the seat of the judicial system (Supreme Court); and the main base of the Azores Air Zone Command (Portuguese: Comando da Zona Aérea dos Açores), Base Aérea nº 4, and a United States Air Force detachment.

The island of Terceira consists of four overlapping stratovolcanoes built over a geologic structure called the Terceira Rift:
- A triple junction between the Eurasian, African and North American tectonic plates. These volcanic structures rise from a depth of over 1,500 metres (5,000 ft) from the floor of the Atlantic Ocean. Radiocarbon dating of eruptive units, in support of geologic mapping, has improved the known chronology of Middle to Late Pleistocene and Holocene volcanic activity on the island of Terceira, Azores, defining the east-to-west progression in stratovolcano growth. These have commonly resulted in a classification of the eruptive events into the following structures:
- Cinco Picos Volcanic Complex: the oldest on Terceira (defined by the Serra do Cume), which completed its main sub-aerial activity by about 370–380,000 years ago. Collapse of the upper part of the stratovolcanic edifice formed an enormous 7 by 9 kilometres (4 by 6 miles) caldera about 370,000 years ago. Post-caldera eruptions of basalt from cinder cones on and near the caldera floor and trachytic pyroclastic flow and pumice fall deposits from younger volcanoes west of Cinco Picos have refilled much of the caldera producing an almost-uninterrupted fertile plain.
- Guilherme Moniz Volcanic Complex: the southern portion, in the central part of the island, began erupting about 100,000 years later (about 270,000 ka) and produced trachyte domes (approximately 808 m/2651 ft in altitude), flows, and minor pyroclastic deposits for another 100,000 years (until at least 111 ka). The highest point along the caldera rim reaches 623 metres (2,044 feet). The northern portion of the Caldera is less well exposed, but reflects a similar age range. The northwest portion of the caldera was formed sometime after 44 ka. Several well-studied ignimbrites that blanket much of the island likely erupted from Guilherme Moniz Volcano.

The Sanjoaninas, which take place in June, are the biggest popular festivities in the Azores and offer a visiting card for many tourists who journey to Terceira island, in order to partake in and share local traditions and customs. The Sanjoaninas festivities date back to the XVI century and have always played a key role in the culture of the Azores. They begin with the opening procession and march of the queen and continue for several days, encompassing cultural, recreational, ethnographic and sporting activities. One of the highpoints of the festivities is the Sanjoaninas Bullfighting Festival which is one of the most important events of its kind in the Iberian peninsular and includes bullfights, bullfights with ropes and bull runs in the streets.

They are the counterpoint praiense to Sanjoaninas angrenses. They take place in August and comprise almost all the attractions of the queens (although not always on the same scale), but adding to it the island's largest gastronomic festival and a tent for rave parties (and the like) absolutely frenetic. In the last years, they have inflected towards an atmosphere closer to that of the summer festival, which has been increasing their charisma and interest. 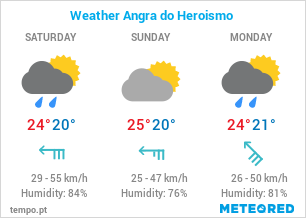