Flores Island is an island of the Western group (Grupo Ocidental) of the Azores. It has an area of 143 km², a population of approximately 3907 inhabitants, and, together with Corvo Island of the western archipelago, lies within the North American Plate. The nearby Monchique Islet is the westernmost point of Portugal.

It has been referred to as the Ilha Amarelo Torrado (Yellow/Auburn Island) by marketing and due to the association with poet Raul Brandão, but it is well known for its abundance of flowers, hence its Portuguese name of Flores.

The Emigrant Festival is celebrated to honor those who have left the island in search of a better life, but who return to their homeland each year. Folk festivals and gatherings of old friends are the highlight during the month of July. The previous month, on June 24, residents also celebrate the Festival of St. John. The devotion to this patron saint dates back to the time of the settlers who came from the island of Terceira, and was kept alive and strong throughout the centuries. Similar to the rest of the archipelago, the Feasts of the Holy Spirit occur from May to September. This cult is especially and colorfully celebrated in Santa Cruz due to the arches of flowers that decorate the streets 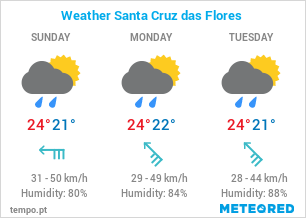